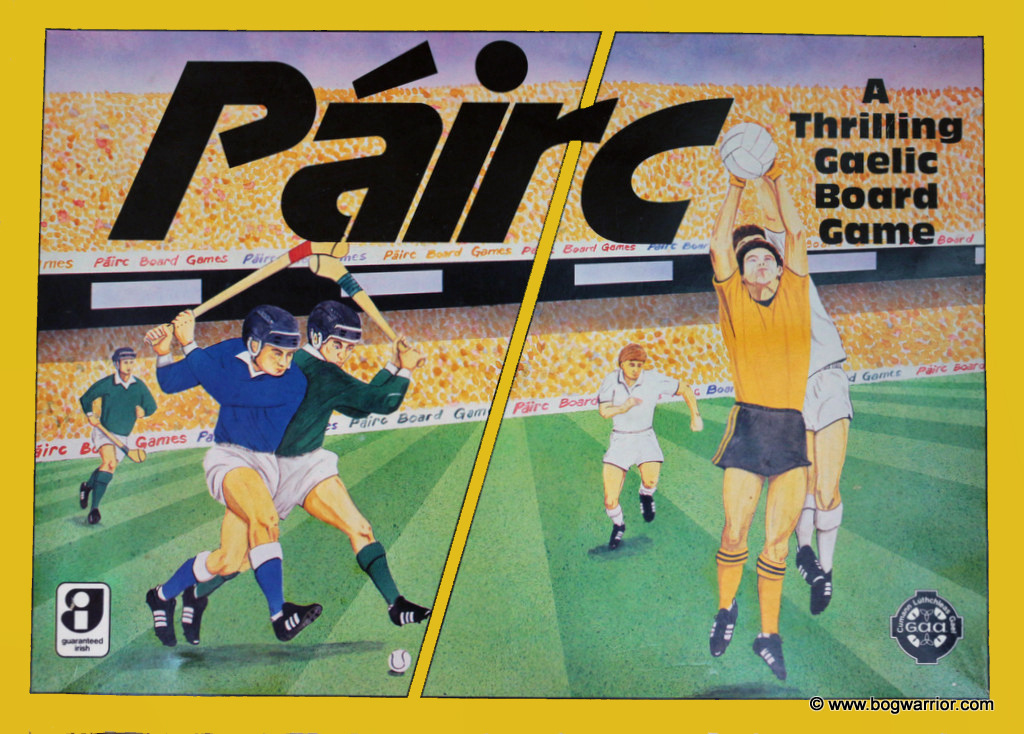 As we all know, gaelic football and hurling are exciting sports which are enjoyed by very many people in Ireland. So how better to convey the speed and the thrills of our native sports than to er….replicate it as a board game?

Páirc (pronounced as “pawrk”) was a board game which came out in 1985. The mutant offspring of Subbuteo (figurines!) and Monopoly (dice, cards!), the lid of the box proclaimed that it was “A thrilling Gaelic board game”. So needless to say, a game which promised so much was bound to be delivered by Santa Claus that Christmas 😈

What’s in the box?

Most of these survived in our game, apart from the dice holder, the small ball for hurling and the goalposts. So for the photos, I embraced my inner 10-year-old and improvised using a skewer, glue and some blu-tack 😉

After the excitement of opening the box, things inevitably started to ground to a halt 😦 For it turned out that Páirc was long on rules and short on action. Let’s face it, it’s going to get slow when you open the box and are faced with two stacks of cards (the Referee Cards and the Break of the Ball ones serve the same purpose as the Chance? and Community Chest ones in Monopoly), dice and instructions that run to 6 pages… It’s all too boring to describe really – if you’re a glutton for punishment you can have a look at the rules here  (7mb pdf file)

It also was a game that took forever to set up. Instead of having little players ready to go out of the box like you would with Subbuteo, the players in this game came in the form of cardboard cut-outs which sat into plastic bases. And as we all know, cardboard isn’t a medium that stands up well to repeated poking and prodding. So it’s no great surprise that even though we didn’t really play the game that often, many of the game figures are grubby and the worse for wear.

Also in the box was a scoresheet from when we played the game. They’re very low-scoring games and perhaps that’s the most criminal thing of all. One of the unique selling points of Gaelic games is the scores. Not something that was ever going to happen in Páirc unless you’re the sort of person who enjoys jogging through treacle.

Click on an image below to launch the gallery