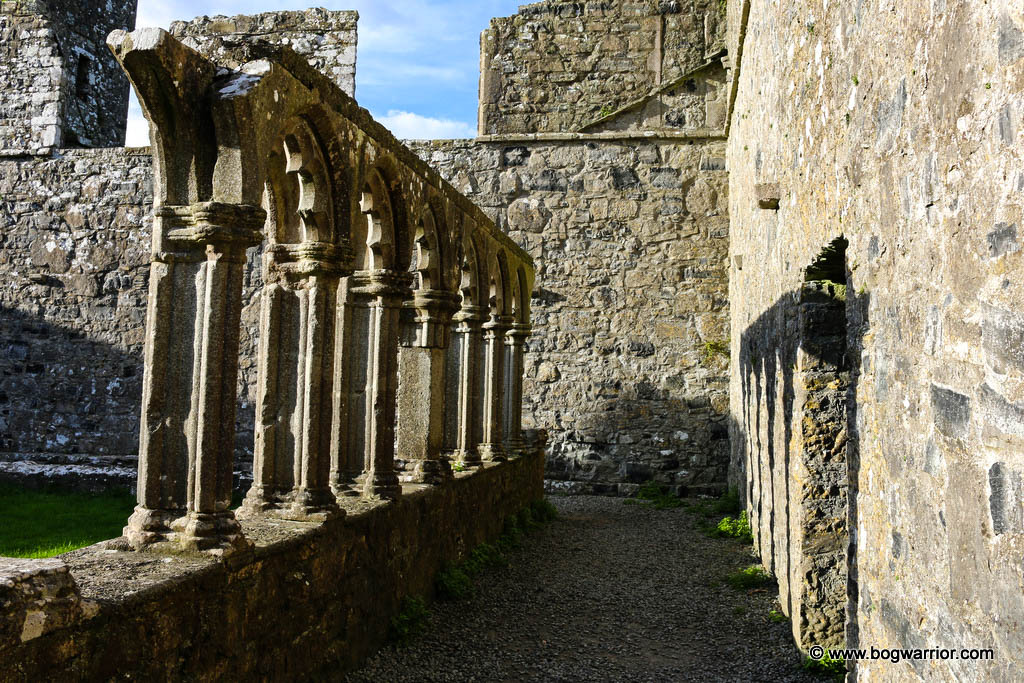 Fore is a sleepy village in north Co. Westmeath, nestled in the hills near Lough Lene. It’s off the beaten track and not the sort of place you’ll visit by chance. At first glance, the monastic ruins beside the village don’t seem to be anything out of the ordinary. That is until you take a closer look…

A brief history of Fore

Fore gets its name from the old Irish word Fobhair which is pronounced in the same way as Fore. It means “water springs” which makes sense because there’s plenty of that around here. The monastic settlement at Fore is actually made up of two separate monasteries, split by a road. The older part of the monastery, on the left-hand side of the road, was founded by St. Féchin in the 7th century. Very little remains from that era apart from a little church that’s named after St. Féchin (more on that later). There may have been two more churches on the site but they have vanished without a trace. It is thought that in the heyday of this early monastery, 300 monks and 2,000 students lived here. Where exactly they crammed them all is another question. Further up the hill from the church is a mausoleum which is a relatively modern addition.

In 665, St. Féchin and some other high ranking clergy were approached by two kings who had an interesting request for them. They asked them to pray to God for a plague to come and wipe out the lower classes of society, reducing their number. God answered their prayers after a fashion – St. Féchin and his comrades died of yellow plague.

Across the road from are the remnants of a much more substantial monastery. These buildings were built by the Anglo-Normans and it became a Benedictine monastery with strong links to France. Indeed, this monastery is dedicated both to St. Féchin and to the French St. Taurin. The first Benedictine monks in Fore were French – what they thought of rural Westmeath has been lost in the mists of time. Because this was the era when England and France were at war, Fore frequently was seized by the English because of the French connection. It also suffered many attacks during its existence. It’s known that Fore was burned at least 12 times between the 8th and 12th centuries. Often these attacks were led by the Vikings. It’s believed that there were a staggering 3,000 monks housed in and around the abbey in Fore’s heyday. The abbey’s time finally came to an end in 1539 as part of King Henry VIII’s campaign of monastery closures in the  British Isles. Luckily for the abbot in charge of Fore, he walked away with his head still attached to his shoulders and a pension from the king. All he had to do was agree to the closure of the abbey. Once this happened, it was ransacked and anything of value taken away.

A less obvious feature of the area is what has become known as the Fore Crosses. There are 18 of these little crosses, carved hundreds of years ago and placed along the road to Fore and in nearby fields. There is one in the centre of the village and others on the outskirts of the village.

It may be mostly crumbly old ruins these days but Fore still is known for its mysterious 7 Wonders. These are

Are these wonders still as wondrous as they were? You decide 🙂

The Monastery in a Bog

This 13th century Benedictine Abbey is now in ruins but there’s still lots to see. It was built around a cloister and courtyard. The partial remains of the cloister can still be seen. Two large towers were built in the Abbey, partly as accommodation, partly as defensive structures. Arrow slits can be seen on the towers and the entrance gate has a murder hole incorporated into it. These days, the ground surrounding the abbey is less marshy/boggy than it was. Perhaps a modern day miracle is that despite all the attacks and being open to the elements for centuries, there’s so much remaining.

The Mill Without A Race

Legend has it that a mill was built but it had no race. Luckily St. Fechin was on hand with his trusty crozier. He struck the ground with it and water gushed forward. Spectacular but perhaps a slight embellishment of the truth. The mill was supplied by a number of springs which flow underground from nearby Lough Lene. There are still some remnants of the old mill pond, although it’s mostly silted up these days. The existing mill (or what’s left of it) are built on the site of the original mill from St. Féchin’s time. It remained in use until around 1875 and is marked on the original Ordnance Survey 6″ map.

The water that flows uphill

Unfortunately, the subtlety of this one passed me by. It seems that if you look carefully, the stream that flows ever so slightly downhill in the field leading to the ruined abbey turns back on itself and flows uphill. Maybe.

Now this one is even more bewildering than the uphill water. Especially if you’re on the lookout for a tree with three branches. The original unburnable, three-branched tree stood over a holy well known as Tobernacogny. A plaque on the wall behind it explains it all
“There was an ash tree with three branches growing over the well and it was – and still is – the custom for visitors to drive a coin edgeways into the bark. This may have been injurious to the tree which is now dead but the single surviving branch still exhibits a good selection of coinage. It is said that the wood from the tree will not burn and the water from the well will never boil. The water was taken as a cure for headache and toothache. ”

The tree that stands today is known as a rag tree or a raggedy bush. As the name might suggest, it is covered in rags and pieces of clothing. There is still a belief amongst certain people that if a piece of clothing belonging to someone who’s ill or has a problem is hung on the tree, that it will disappear as the cloth rots. There was no sign of any water in the well so perhaps it has given up on curing people’s aches and pains.

The Anchorite (or hermit) in a cell

There is a hermit’s cell in the tower of this little chapel. When a hermit entered the cell, he vowed never to go outdoors again for the rest of his life. It is believed that the last hermit in Ireland was Patrick Beglan, who was here in 1616. The tower was built in the 15th century and the rest of the chapel added on in the 18th. Unfortunately, this church is usually locked up so few people ever get to see the cell looks like.

St. Féichin’s church is the oldest building on the site. It was built in the 7th century as a much smaller church but was extended in the centuries after that. Its most notable feature is the lintel over the doorway. It is very heavy (it’s estimated it weighs at least 2 tons) and not something that could be lifted easily by anyone. The story goes that when the workmen building the church were having their breakfast, St. Féichin said some prayers, then lifted up the stone and put it in position.

Overlooking Fore is a hill with a rocky outcrop on top. It’s known as Carrick Balor. For anyone unfamiliar with Irish placenames, Carrick is an Anglicisation of the word Carraig which means rock. Balor was an evil-eyed monster or god from Irish mythology.

Along the gravelled walkway that leads from the car park to the ruins of the Abbey is a second holy wall known as Doaghfeighin, or St. Féichin’s Well. It’s described elsewhere as being a well surrounded by box-like stones. Alas, it’s not possible to take a closer look these days because not only is it mostly hidden by trees but it’s fenced off with a barrier. It is possible that this may have been an earlier megalithic tomb or cist.

The village of Fore developed alongside the monastery. Today it’s a quiet village with a population of fewer than 400 people. A sign of its previous importance are the two medieval town gates on its outskirts and the remnants of a jail in the village itself.

In the 19th century, an ancient bell was found in nearby Lough Lene. This was a popular haunt of Turgesius the Viking, a man who was partial to raiding Fore. The website Voices from the Dawn has put forward the intriguing theory that this bell may once have been St. Féchin’s ceremonial bell. The bell is now in the possession of the National Museum of Ireland. A smaller replica of it is used in the Irish Parliament (The Dáil) by the speaker of the house to try and maintain order.