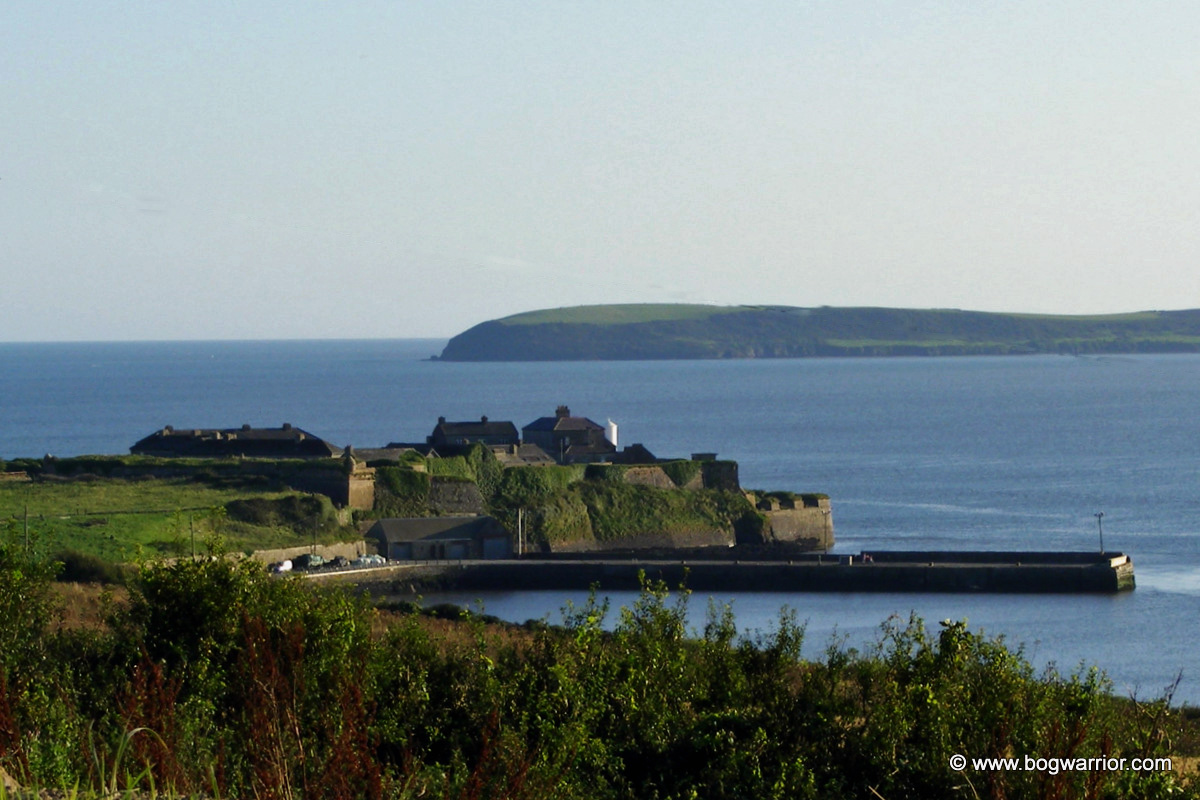 I’ve been in or around the seaside town of Duncannon many times but until this year had never got around to visiting its star-shaped fort. I’ve seen it from a distance, I’ve looked up at it from the beach that lies underneath it and I’ve even walked past the entrance gates. The fort, which has long since ceased to be an active facility, is open to the public during the summer months. And as I discovered when I finally did get around to visiting and took the excellent guided tour, it’s a fascinating work in progress.

The fort is built at the tip of a peninsula, overlooking the entrance into Waterford Harbour. As strategic locations go, it’s one of the better ones.  The width of the bay and the layout/depth of the channel means that one fort is enough for keeping an eye on anything coming and going by sea. More bang for your buck when it comes to forts. Perhaps unsurprisingly, the fort which stands here now isn’t the first one to have been built on the site. The present fort dates from the 16th century but it was had previously been home to a Norman fort of some sort in the 12th century. There is also evidence that suggests there was a wooden fort here going further back into history. Old maps from the 16th/17th century show a ruined church, a castle and some defensive structures on the site. These are long gone but the stone from them has no doubt been reincorporated into what’s here now.

Fearing an invasion by the Spanish Armada, the present fort was built by Queen Elizabeth I in 1587-88. They never arrived but that didn’t mean that it didn’t get to see some action. In 1645 it was captured by  Irish Catholic Confederation forces and remained under their control until 1650. Oliver Cromwell, arguably the least popular Englishman to ever tread on Irish soil, tried but failed to recapture it a year earlier. His son-in-law Henry Ireton got his hands on it a year later. It is believed that both monarchs who fought in the Battle of the Boyne in 1690 stayed in Duncannon Fort before leaving the country.  King James II left for France on 3rd July 1690 whilst the victorious William of Orange stayed there in September of the same year.

During the 1798 Rebellion, the fort remained under British control. Indeed, it became a prison for captured Irish rebels and a place where some of them were executed. Depending on which version of the Irish rebel song “The Croppy Boy” you listen to, the title character meets his end in Duncannon. Or Dungannon which is at the other end of the country..

In Samuel Lewis’s Topographical Dictionary of Ireland (1837) the fort is described as “..adapted for mounting 42 pieces of cannon, and, including ” the bombproof” erected in 1815, contains barracks for 10 officers and 160 men, residences for the chaplain, fort-major, storekeeper, and other officers, and a chapel for the garrison; the whole is surrounded by a dry moat crossed by a drawbridge, and the only entrance is defended by a portcullis.”

The buildings in the fort were built at different times but look more uniform these days because of changes made to the site in the run-up to World War I. They were covered with roughcast and Tarmacadam was poured on the ground. This covered over the cobblestones which had been there. At least one archway was knocked so that tanks could be driven into the fort. Despite the alterations, there are still many older features remaining intact. The dry moat and sloping walls, circular lunette fortifications, tunnels and gun batteries being some of these.

The fort was handed over to the Irish Army in 1922 when British rule ended here. It was largely burnt down during the civil war the following year. With the onset of World War II (a.k.a. “The Emergency” because we didn’t do wars here) the fort was partially rebuilt and a military presence reinstated. The old Governor’s house now has 1943 (the year it was rebuilt) and the logo of the Irish army on the front of it.

A caretaker’s house (locally known as Burke’s house, after the family who lived in it) was built in 1939 as part of the refortification. Unlike the other buildings here, its front door isn’t level with the ground but has steps up to its front door. This is because when they began to excavate the foundations, they found some human remains. It’s thought this is where a graveyard had been. It’s known that at one stage there was a church close by.

The fort was used as a camp for the Reserve Defence Forces for many years, before finally being handed over to Wexford County Council in 1993. As of 2018, there are still parts of the fort which are too dangerous for members of the public to access. Happily, there are still many places which are safe and will give the visitor a good overall view of what life was like in a place like this.

The fort is also visible from the beach below. As the tour guide remarked, the window which overlooks the beach now has iron bars on it to ward off a newer type of invader.

Duncannon Fort is only open during the summer months. Tickets can be bought in advance or on the day. The official website for opening dates/times is https://duncannonfort.ie/ Admission is by guided tour only but it’s well worth it.