Fertagh or Grangefertagh, is about 4km from the village of Johnstown, Co. Kilkenny. It’s easy to spot from a distance because it is rather tall. It is a shame that only a small fragment of its cap remains because if it was rebuilt, it would become the tallest round tower in Ireland. Maybe somebody needs to sort that out! 😀 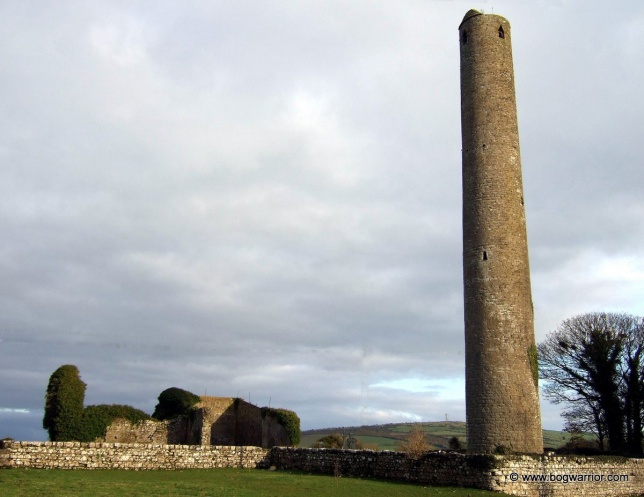 According to the OPW information here, the monastery was probably founded by St. Kieran of Saighir (the same saint who founded Seir Kieran) in the 5th or 6th century. Like just about every other monastery in Ireland, it found itself under attack at various times. It is recorded that the Vikings tried to raid it in 861 but were repelled by Cerbhall of Ossory, who was a powerful King at that time. Indeed, it is suggested that no Vikings raided monasteries in Kilkenny at that time because they did not relish the thoughts of tangling with him. Anyway, he was long gone when the monastery was raided and burned in 1156. It is said that the tower was burned by Muirchertach MacLochlainn (High King of Ireland) with the monastery’s lector inside it…

There are some other ruins on the site but they date from later on. Some remnants from the buildings which were here can now be found in the Catholic and Church of Ireland churches in Johnstown. Nothing else remains of the original monastery.

The original doorway into the tower was badly damaged around 1800 when a local farmer decided that the stones from it would protect his property from fire. The doorway was repaired at a later date but it is still easy to see the damage this idiot did. Indeed, wanton vandalism is a regrettable feature of this site. The ruins of the adjacent medieval church were later converted into a handball alley.

The tower is easy to find – it is in a small cemetery on a narrow country lane. There aren’t many places to park a car though, as you can see from Google Streetview.