Every now and then, a new round tower gets added to the list of known towers. In 2018, some mortar from a ruined tower in the grounds of a grammar school in Derry were radiocarbon dated. It had been thought that the tower was a ruined windmill but the analysis of the mortar revealed it to be an older building. Evidence suggests it could quite likely be a round tower that had been known to have stood in the area.

The rediscovery of the tower at Liathmore, Co. Tipperary took place nearly 50 years before this. In 1969-70 Dr. Robin E. Glasscock from Queens University, Belfast led excavations at this site. The foundations of the tower were found, along with some worked ashlars which were later used to reconstruct the base. The foundations went to a depth of 2.6 metres which is unusually deep for a round tower. As to why the tower vanished and was forgotten about, that’s anybody’s guess. Subsequent to the excavations, the Office of Public Works (OPW) reconstructed the base of the tower using the material found during the dig. The base is surrounded by a larger circular stone wall, constructed by the OPW to protect it from cattle.

The monastery here was founded by St. Mochoemóg in the early 7th century. Tradition has it that he is buried in the larger church. And in a blurring of fact and fiction, he features in some versions of the Children of Lir story as the monk who baptised the four swans and turned them back into humans. Local folklore has it that every four years, four swans return to the area and spend a week here.

The tower base is situated almost half way between two ruined churches. Apart from these, there is evidence of a settlement which once existed here, perhaps until the 16th or 17th century. These lumps and bumps in the ground are easily visible in the area around the larger church

The smaller of the two is an 11th-century oratory. The larger church dates from the 12th century, though it was modified after that. Alterations made in the 15th century are quite noticeable here. There is a loft and steps that access the roof. This church has some interesting features, including some carved heads over the doorway and a Sheela-na-Gig that’s a little hard to find unless you know where to look (fnar). I visited this site on a sunny summer’s evening and wasn’t able to get a decent picture of said exhibitionist. So if you’re curious, there are pics on the “Ireland’s Síle na Gigs” website.

This site wouldn’t make it onto my “must see” list but it was a pleasant way to spend a sunny summer’s evening. The larger church in particular is interesting to look at. Because it’s a much altered building, there are random carvings set into doorways and masonry to look at inside.

This site is trickier to find than most of the others because it is on private farmland and isn’t signposted from the main road. The entrance to the farm, and the farm track out to the site, look a bit different to the 2009 Google Streetview imagery. Other online accounts of visiting this site mention the mud and advise wearing wellies, so I left my visit to this one until we’d had a dry spell of weather.

Unlike most of its contemporaries which are to be found in the countryside, the round tower in Roscrea is in an urban setting. It stands on the side of a street close to the town centre. The original monastic site is now split by a road, though if you stand back from the tower you can still see the tower’s relationship to the church it served as a belfry.

The monastery which once stood here was founded by St. Cronan in the 7th century. Most of what is to be found here now dates from the 12th century. The tower is thought to have been built during this century. There is a record of it being struck by lightning in 1135. As it turned out, it wasn’t just lightning which caused problems for this tower. During the 1798 rebellion, it was used by insurgents to attack nearby buildings. As a result, the top of the tower was removed. This reduced its height by about 6 metres 😦 The tower has an unusual large (by round tower standards) window on its first floor. It is thought that this was to let more light into the tower so activities could take place. As to what activities they might have been, who knows?

It wasn’t just the tower which was sheared of its original bulk. Across the road from it stands the gable end of the 12th century St. Cronan’s Church. Alas, it was largely demolished in 1812 to make way for the less interesting church which now stands behind it. Soem of the material from the old church was used to build the new one. A replica of a high cross stands nearby – the original is now housed in the nearby Black Mills Centre. 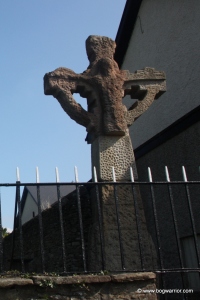 Getting There: This tower is easy to find. It stands on Church Street, close to the town centre 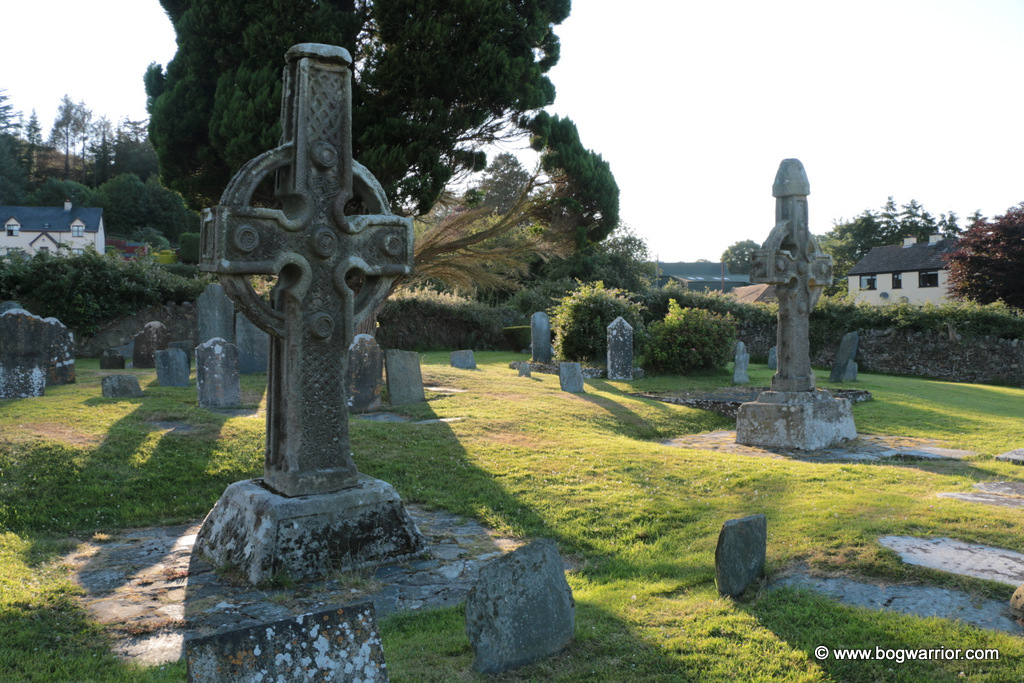 When driving during the week, I noticed a signpost for the tiny hamlet of Ahenny, Co. Tipperary. The sun was shining, I had time on my hands. And so, I took a detour to revisit the two high crosses which stand in the local cemetery. I last visited the site in March 2014 and it all looks rather bleak really. A July evening is much more forgiving, though the roads to the cemetery are still as hair-raising as ever 😀

The two high crosses here are believed to be amongst the oldest in Ireland. Depending on what sources you read, they date from the 8th or 9th century. The interesting thing about these early high crosses is that they’re replicas of the original wood and metal crosses that would have been on the site. So as well as the usual decorative carvings, they replicate the rope and metal that would have bound the original crosses. Also visible on the front of these crosses are versions of the enamel or metal studs which would have decorated them. It is thought that the stone high crosses are larger versions of the original wooden ones which would have been in the monasteries originally. Of course, nobody can say for sure.

Once inside the cemetery, it’s easy to spot the two high crosses. They stand reasonably near each other in the centre of the cemetery without any other crosses near them. They’re both carved out of sandstone and stand over 3 metres in height. Although both have weathered, there is still a lot of detail to be seen on the crosses.

The North Cross is the smaller of the two. An unusual feature of this cross is that it has a capstone on the top. These don’t appear on many high crosses in Ireland. There are varying theories as to what it is and why it’s there. One suggestion is that it’s a replica of a Bishop’s Mitre whilst another archaeologist thinks it may not be an original feature at all. Apparently, it is removable but I certainly wasn’t going to test that out. Standing beside this cross, I didn’t even reach the arms. The cross is decorated with various patterns. Spirals, interlocking squares and even the odd animal’s head are the order of the day. On the base is what appears to be biblical scenes and the twelve apostles but it’s difficult to make out. It is a pity that it is missing one of its circular parts but it is still a fine cross.

The South Cross doesn’t have the same conical cap as its compatriot but still, it is somewhat distinctive. Again, it is decorated with interlocking patterns, spirals, and Celtic style knotwork. The base of the cross is more badly worn than that of the North Cross.

The two Ahenny High Crosses are part of the Ossory group of high crosses. I plan to visit the other three that are part of this group. The two in Kilkieran and the high cross in Killamery.

I previously blogged about the century-old Plaster of Paris high cross replicas which went on display in Dublin. The mould makers chose the Ahenny high crosses as part of their original exhibition over a century ago. More recently, replicas of these two high crosses have found their way into Kilkenny’s Medieval Mile museum